Just because it is not broken... 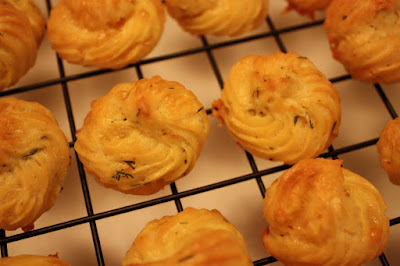 You all know the saying..."If it ain't broke, don't fix it." Well, I have decided that in some instances I plainly disagree. Case in point, my gougers.
I have made gougers the same way for years, and they are absolutely delish!
...but I added dill this time, and they are even better!
Why would I do this to a perfectly good recipe, except out of boredom? Because I am a forgetful, busy woman.
For Thanksgiving I had made my favorite roasted carrots (an Ina recipe) and I was so busy that I completely forgot to add the dill in the end. So, there I am with A LOT of dill and nothing to do with it. Several days later, I ran into some friends that had just cured their own salmon, which takes a lot of dill, but I was too late. What was I going to do with all that dill?
Being that I hate waste, I decided to risk ruining my famous gougers by adding dill.
I am not that daring though, I only added the dill to half the batter.
I anxiously waited while they were cooking, but kept wondering how it could go wrong. The flavors should make sense...
...and they did!
I was planning on putting the regular version of this recipe in the cookbook, but I took a risk, it paid off, and now you all will see the dill version of the recipe instead. So, I challenge you today to take one of your favorite recipes and do something new to it. What is the worst that can happen? It does not turn out...order a pizza.
Posted by The Kitchen Tart at 1:14 PM