This is a photo of me sometime in the 1980's at the ripe age of three or four looking thoroughly bored with lobster.. 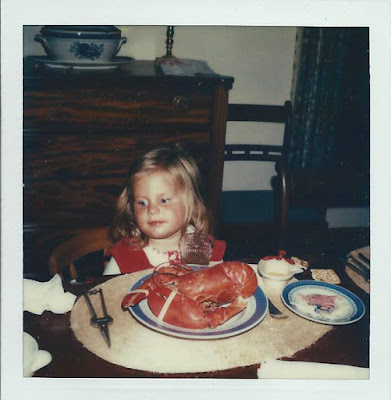 For those who grew up in any area of the country other than where I did (New England) this may be an unthinkable situation, but there were times where it was less expensive to buy lobster than steak...and I think that this must have been one of those times.

Additionally, I grew up spending many summers in Maine with my grandparents, and my grandmother felt it her duty to provide her guests with as much lobster as they wanted (which as you can imagine probably made her have a facial expression similar to mine at times).

So...let's get creative with the things that you can do with lobster...

Jamie Oliver has a recipe for lobster mac and cheese that will make your family and guests think that you got it from a fancy steak house.

You can make lobster pizza.  My grandmother did this once or twice and I have to admit that while interesting, it was not necessarily my favorite.  I do not remember my grandmother's having bacon on it, but this recipe from the New York Times includes that as a tasty additional treat.

This lobster risotto recipe from Williams-Sonoma will likely leave your mouth feeling like it has just experienced heaven.

...but I always fall back to the thing that has always left me with a smile...a simple, New England style Lobster Roll.  No extra filler.  A buttery bun.  Cains mayo.  Here is the recipe...

Directions:
Move your oven rack to the top position and turn the broiler on.

Place the picked lobster meat in a bowl and add a spoonful or two of Canes mayonnaise.  You want to lightly coat the meat, but you do not want the mayonnaise flavor to overpower the flavor of the lobster meat.

Butter both sides of two New England style hot dog rolls.  Place them under the broiler with one of the buttered sides up.  Watch the buns carefully and remove them when they start to brown.  Flip the buns and repeat the same thing with the other side of the bun.  Remove them from the oven when both sides have a nice buttery yellow center and crispy light-brown edge.

Place half of the meat in each of the two buns.

Stop here.  Do not do anything else to the food.  Except, of course, eat it.

Posted by The Kitchen Tart at 9:00 AM